Kit joined the Standard Motor Car company in 1947. At the time Triumph was known for its Renown and the Roadster. Kit started in the Technical office doing various things including; stress tests, gear and spring design, checking out the Drivers Handbook, patents, and performance forecasting.

Kit had developed an interest in Motorsports and in 1953 he watched the Monte Carlo Rally and the LeMans race. In 1954 Triumph decided to get involved a competition section under Ken Richardson was started. In 1954 the team did moderately well. Over a 3-year period they entered a half-dozen races per year. In 1957, Kit emigrated to Canada and the Rally story ends. Kit says that his colleagues never believed that over 40 years later there would be the interest in these cars he sees today. 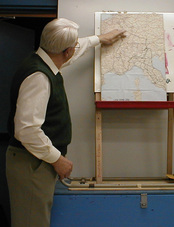 Kit went on to talk about the 55 Monte Carlo, RAC rallies in the UK, the Tulip rally in the Netherlands and the 24 hour race.

There had been a bad accident during the 24 hour race and the July Lemans had been cancelled as had all motorsports in France. Kit talked about the Liege-Rome-Liege rally as wells as the Midnight Sun rally in Sweden.

As a visual Aid Kit had brought along a map or Europe, to explain the routes and that rallies never traveled straight lines. No repairs were allowed outside those that were commercially available to the average motorist – so if you tire blew at 6:30 and the garage closed at 6:00 then you waited until the following morning. These rallies did not have manufacturers trucks full of spares following the cars. Similarly, gas was only available at service stations during service station hours. 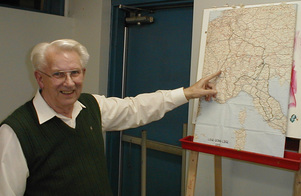 The car that Kit favoured was really a TR2. Of course being a Triumph factory car it had been modified and was actually up to TR3 specs before the name was applied.

The Liege Rome-Liege rally was planned for a 96 hour schedule with 65 checkpoints – no time to eat and no time to ... I don’t recall how Kit said it delicately but I’m sure he meant no time to pee.

In August 1955 they took 2 cars and spent 10 days on reconnaissance along the Liege-Munich-Innsbruck areas. 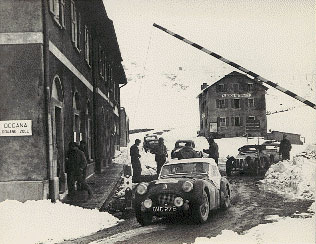 The rally started on Tuesday, Monday was what was called a Parc Ferm where the cars were sequestered under police protection and were not to be worked on.

The cars left the parc ferm under police escort (150 cars) through the town of Spa which was 20-30 miles outside Liege.

The rally started with 3 cars leaving every 3 minutes versus the standard 1 car and at 1 minute intervals.

Cars at that time were mostly private entries with Team Triumph being one of the few factory teams. The first problem was a diversion where the cars could average only 60 km/hr. They had to do everything to stay within the time/distance checkpoints.

At border crossings, some were sticky, some required documents to be displayed on the hood and were stamped as the cars drove by at low speed.

Coming up to a nightly checkpoint they encountered a flat. The mileage told them they were close, the time was less than a minute. Kit convinced Ken to keep driving – they made it. 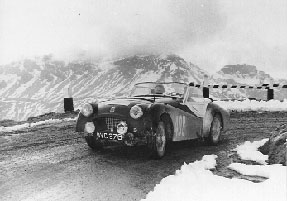 At one particular stop in France, Kit went in search of service. The only service was an assembly line process – somehow in broken English and French the owner and Kit negotiated the removal of several cars from the line while Kit jumped line and had an oil change and service. Ken was going spare with worry as Kit had left for a quick oil change but the entire episode was measured in hours not minutes.

The rally kept to a gruelling pace. The system that Kit and Ken put together called for 3-hour sleep while the other drove alternating every three hours.

It was only later that Kit found out that Ken had let him sleep at one stage for only ten minutes before switching drivers again. 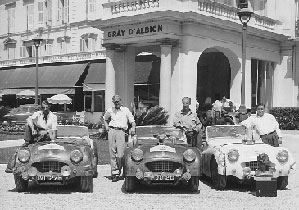 Coming to the end of the rally, newspapers were distributed telling of the final results of the rally – Team Triumph won the team title and Kit & Ken came in 5th overall.

All in all, Kit kept us mesmerized for the evening. At times I felt myself drawn in by his words (unfortunately, so drawn in that I didn’t commit all to paper)

All I can say is, corner Kit sometime and ask him about the DKW or the 2CV or the complete power failure on the dark. Or perhaps the dents in OVC 276? Which ones were his? Which ones?