by Michael Graham and Brian Mills

Last week I was in the Barrhaven CTC store and saw a 1 amp battery charger on sale of $9.99. I remembered that Brian in one of his technical talks had suggested that this sort of charger was perfect for keeping a battery charged while in storage. Announced my purchase to Brian a couple of days later, and he informed me that most inexpensive chargers don’t work at all. “Bring it over and we’ll put it through its paces!” ... never does anything electrical gets under Brian’s radar. So here we have the results of the testing. By the way, the charger is CTC part number 11-1543-6. 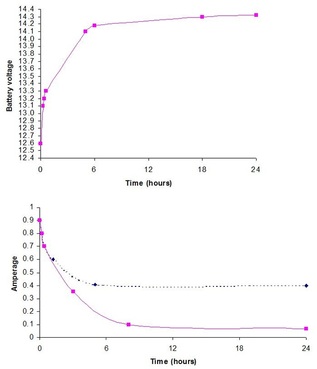 The top graph on the left shows the performance of the charger over 24 hours. The nominal resting voltage of the battery (a 5-year old one in good condition in this case) is 12.6 volts. The charger brought this up to the fully charged state of between 14.2 and 14.4 volts in about 24 hours.

The instructions that come with the charger give different average charge times for different capacity batteries, and the times Brian recorded seem to fall in the ranges specified. One note: this is a manual charger and must be monitored to prevent overcharging of the battery. Brian’s recommendation was to leave it on charge for about 24 hours every week or so to keep your battery at full charge over the winter.

The bottom graph on the left shows how the current flow dropped over time (as the voltage increases). The top line was for the 5-year old battery (with higher self discharge). The bottom line for a newer battery with lower self discharge.

Perhaps more technical information than most of us need, but for $10 looks like this is a good way to keep your battery in tip top shape.