by Brian Mills
Putting a timing chain on an engine is usually not a big deal. In many engines, both the crankshaft sprocket and the camshaft sprocket are aligned to their shafts with a key and key way. This allows the sprocket to fit only in one position relative to the shaft. It is usually a minor matter of aligning the timing marks and installing the chain.

Most Triumph Camshaft Sprockets
The camshaft sprocket has 42 teeth, which means that for 90 degrees of rotation there are 10.5 teeth. This also means that if the other two holes are used to mount the sprocket the relative position of the sprocket to the cam is offset by 0.5 of a tooth (Figure 1). 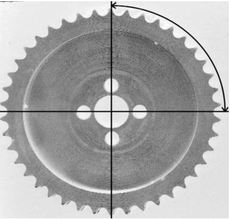 In addition, the centre lines through the mounting holes are actually offset from the crest and trough by ± 1/8 of a tooth. When one side of the sprocket is used we have 0 (reference) and 0.5 tooth offsets. When the sprocket is flipped front to back, installed in the same holes or rotated 90 degrees you produce a net effect of 0, 0.25, 0.5, and 0.75 tooth offsets.

This reversible sprocket is found in TR2 through TR4A (dual chain) and Spitfires, early TR250s, and GT6s, which use single chain drives.

TR6 Non-Reversible Camshaft Sprockets
After having problems setting up the valve timing of a TR6 engine that had a new camshaft sprocket installed, I did some investigation. Here is what I found:


In an accompanying article, Brian explains what all this mean when you try to adjust your valve timing.